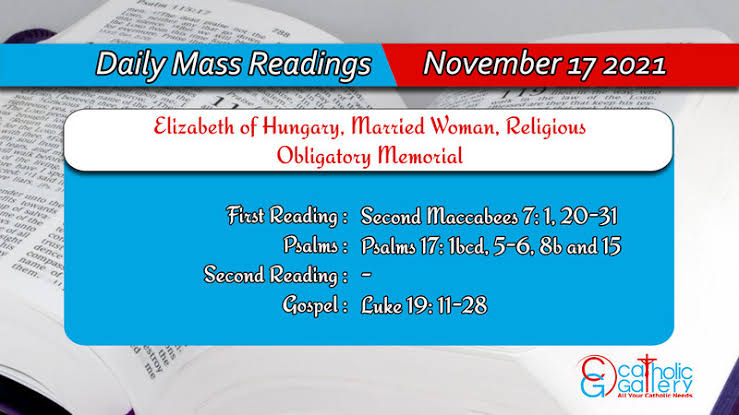 First Reading: Second Maccabees 7: 1, 20-31
1 It came to pass also, that seven brethren, together with their mother, were apprehended, and compelled by the king to eat swine’s flesh against the law, for which end they were tormented with whips and scourges.

20 Now the mother was to be admired above measure, and worthy to be remembered by good men, who beheld seven sons slain in the space of one day, and bore it with a good courage, for the hope that she had in God:

21 And she bravely exhorted every one of them in her own language, being filled with wisdom: and joining a man’s heart to a woman’s thought,

22 She said to them: I know not how you were formed in my womb: for I neither gave you breath, nor soul, nor life, neither did I frame the limbs of every one of you.

23 But the Creator of the world, that formed the nativity of man, and that found out the origin of all, he will restore to you again in his mercy, both breath and life, as now you despise yourselves for the sake of his laws.

24 Now Antiochus, thinking himself despised, and withal despising the voice of the upbraider, when the youngest was yet alive, did not only exhort him by words, but also assured him with an oath, that he would make him a rich and a happy man, and, if he would turn from the laws of his fathers, would take him for a friend, and furnish him with things necessary.

25 But when the young man was not moved with these things, the king called the mother, and counselled her to deal with the young man to save his life.

26 And when he had exhorted her with many words, she promised that she would counsel her son.

27 So bending herself towards him, mocking the cruel tyrant, she said in her own language: My son, have pity upon me, that bore thee nine months in my womb, and gave thee suck three years, and nourished thee, and brought thee up unto this age.

28 I beseech thee, my son, look upon heaven and earth, and all that is in them: and consider that God made them out of nothing, and mankind also:

31 But thou that hast been the author of all mischief against the Hebrews, shalt not escape the hand of God.

1 Hear, O Lord, my justice: attend to my supplication. Give ear unto my prayer, which proceedeth not from deceitful lips.

5 Perfect thou my goings in thy paths: that my footsteps be not moved.

6 I have cried to thee, for thou, O God, hast heard me: O incline thy ear unto me, and hear my words.

8b Keep me, as the apple of thy eye. Protect me under the shadow of thy wings.

15 But as for me, I will appear before thy sight in justice: I shall be satisfied when thy glory shall appear.

16 I chose you from the world, to go and bear fruit that will last, says the Lord.

Gospel: Luke 19: 11-28
11 As they were hearing these things, he added and spoke a parable, because he was nigh to Jerusalem, and because they thought that the kingdom of God should immediately be manifested.

12 He said therefore: A certain nobleman went into a far country, to receive for himself a kingdom, and to return.

13 And calling his ten servants, he gave them ten pounds, and said to them: Trade till I come.

14 But his citizens hated him: and they sent an embassage after him, saying: We will not have this man to reign over us.

15 And it came to pass, that he returned, having received the kingdom: and he commanded his servants to be called, to whom he had given the money, that he might know how much every man had gained by trading.

17 And he said to him: Well done, thou good servant, because thou hast been faithful in a little, thou shalt have power over ten cities.

19 And he said to him: Be thou also over five cities.

20 And another came, saying: Lord, behold here is thy pound, which I have kept laid up in a napkin;

22 He saith to him: Out of thy own mouth I judge thee, thou wicked servant. Thou knewest that I was an austere man, taking up what I laid not down, and reaping that which I did not sow:

23 And why then didst thou not give my money into the bank, that at my coming, I might have exacted it with usury?

24 And he said to them that stood by: Take the pound away from him, and give it to him that hath ten pounds.

25 And they said to him: Lord, he hath ten pounds.

26 But I say to you, that to every one that hath shall be given, and he shall abound: and from him that hath not, even that which he hath, shall be taken from him.

27 But as for those my enemies, who would not have me reign over them, bring them hither, and kill them before me.

28 And having said these things, he went before, going up to Jerusalem.