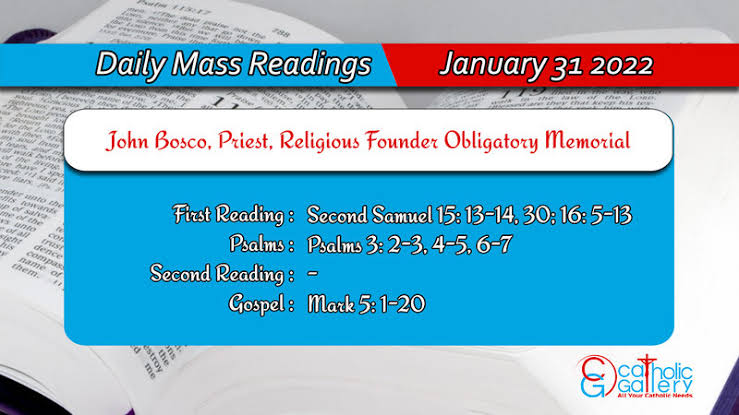 14 And David said to his servants, that were with him in Jerusalem: Arise and let us flee: for we shall not escape else from the face of Absalom: make haste to go out, lest he come and overtake us, and bring ruin upon us, and smite the city with the edge of the sword.

30 But David went up by the ascent of mount Olivet, going up and weeping, walking barefoot, and with his head covered, and all the people that were with them, went up with their heads covered weeping.

16:5 And king David came as far as Bahurim: and behold there came out from thence a man of the kindred of the house of Saul named Semei, the son of Gera, and coming out he cursed as he went on,

6 And he threw stones at David, and at all the servants of king David: and all the people, and all the warriors walked on the right, and on the left side of the king.

7 And thus said Semei when he cursed the king: Come out, come out, thou man of blood, and thou man of Belial.

9 And Abisai the son of Sarvia said to the king: Why should this dead dog curse my lord the king? I will go, and cut off his head.

10 And the king said: What have I to do with you, ye sons of Sarvia? Let him alone and let him curse: for the Lord hath bid him curse David: and who is he that shall dare say, why hath he done so?

11 And the king said to Abisai, and to all his servants: Behold my son, who came forth from my bowels, seeketh my life: how much more now a son of Jemini? let him alone that he may curse as the Lord hath bidden him.

12 Perhaps the Lord may look upon my affliction, and the Lord may render me good for the cursing of this day.

13 And David and his men with him went by the way. And Semei by the hill’s side went over against him, cursing, and casting stones at him, and scattering earth.

2 Why, O Lord, are they multiplied that afflict me? many are they who rise up against me.

3 Many say to my soul: There is no salvation for him in his God.

4 But thou, O Lord art my protector, my glory, and the lifter up of my head.

5 I have cried to the Lord with my voice: and he hath heard me from his holy hill.

6 I have slept and taken my rest: and I have risen up, because the Lord hath protected me.

7 I will not fear thousands of the people, surrounding me: arise, O Lord; save me, O my God.

16 A great prophet has arisen in our midst and God has visited his people.

Gospel: Mark 5: 1-20
1 And they came over the strait of the sea into the country of the Gerasens.

2 And as he went out of the ship, immediately there met him out of the monuments a man with an unclean spirit,

3 Who had his dwelling in the tombs, and no man now could bind him, not even with chains.

4 For having been often bound with fetters and chains, he had burst the chains, and broken the fetters in pieces, and no one could tame him.

5 And he was always day and night in the monuments and in the mountains, crying and cutting himself with stones.

6 And seeing Jesus afar off, he ran and adored him.

7 And crying with a loud voice, he said: What have I to do with thee, Jesus the Son of the most high God? I adjure thee by God that thou torment me not.

8 For he said unto him: Go out of the man, thou unclean spirit.

9 And he asked him: What is thy name? And he saith to him: My name is Legion, for we are many.

10 And he besought him much, that he would not drive him away out of the country.

11 And there was there near the mountain a great herd of swine, feeding.

12 And the spirits besought him, saying: Send us into the swine, that we may enter into them.

13 And Jesus immediately gave them leave. And the unclean spirits going out, entered into the swine: and the herd with great violence was carried headlong into the sea, being about two thousand, and were stifled in the sea.

14 And they that fed them fled, and told it in the city and in the fields. And they went out to see what was done:

15 And they came to Jesus, and they see him that was troubled with the devil, sitting, clothed, and well in his wits, and they were afraid.

16 And they that had seen it, told them, in what manner he had been dealt with who had the devil; and concerning the swine.

17 And they began to pray him that he would depart from their coasts.

18 And when he went up into the ship, he that had been troubled with the devil, began to beseech him that he might be with him.

19 And he admitted him not, but saith to him: Go into thy house to thy friends, and tell them how great things the Lord hath done for thee, and hath had mercy on thee.

20 And he went his way, and began to publish in Decapolis how great things Jesus had done for him: and all men wondered.