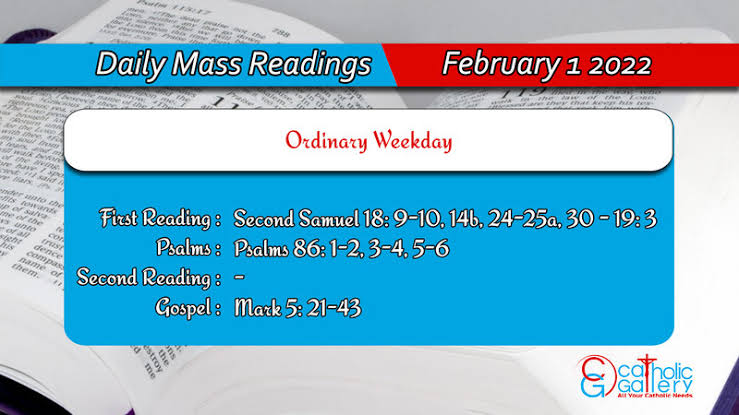 Welcome to Catholic Daily Mass Readings for Tuesday 1st January 2022 Ordinary Weekday. May the Lord bless you through this Mass reading. Kindly share with other people.

10 And one saw this and told Joab, saying: I saw Absalom hanging upon an oak.

14 And Joab said: Not as thou wilt, but will set upon him in thy sight. So he took three lances in his hand, and thrust them into the heart of Absalom: and whilst he yet panted for life, sticking on the oak,

24 And David sat between the two gates: and the watchman that was on the top of the gate upon the wall, lifting up his eyes, saw a man running alone.

25a And crying out he told the king: and the king said: If he be alone, there are good tidings in his mouth.

30 And the king said to him: Pass, and stand here.

31 And when he bad passed, and stood still, Chusai appeared: and coming up he said: I bring good tidings, my lord, the king, for the Lord hath judged for thee this day from the hand of all that have risen up against thee.

32 And the king said to Chusai: Is the young man Absalom safe? And Chusai answering him, said: Let the enemies of my lord, the king, and all that rise against him unto evil, be as the young man is.

19:1 The king therefore being much moved, went up to the high chamber over the gate, and wept. And as he went he spoke in this manner: My son Absalom, Absalom my son: would to God that I might die for thee, Absalom my son, my son Absalom.

2 And it was told Joab, that the king wept and mourned for his son:

3 And the victory that day was turned into mourning unto all the people: for the people heard say that day: The king grieveth for his son.

1 Incline thy ear, O Lord, and hear me: for I am needy and poor.

2 Preserve my soul, for I am holy: save thy servant, O my God, that trusteth in thee.

3 Have mercy on me, O Lord, for I have cried to thee all the day.

4 Give joy to the soul of thy servant, for to thee, O Lord, I have lifted up my soul.

5 For thou, O Lord, art sweet and mild: and plenteous in mercy to all that call upon thee.

6 Give ear, O Lord, to my prayer: and attend to the voice of my petition.

17 Christ took away our infirmities and bore our diseases.

Gospel: Mark 5: 21-43
21 And when Jesus had passed again in the ship over the strait, a great multitude assembled together unto him, and he was nigh unto the sea.

22 And there cometh one of the rulers of the synagogue named Jairus: and seeing him, falleth down at his feet.

23 And he besought him much, saying: My daughter is at the point of death, come, lay thy hand upon her, that she may be safe, and may live.

24 And he went with him, and a great multitude followed him, and they thronged him.

25 And a woman who was under an issue of blood twelve years,

26 And had suffered many things from many physicians; and had spent all that she had, and was nothing the better, but rather worse,

27 When she had heard of Jesus, came in the crowd behind him, and touched his garment.

28 For she said: If I shall touch but his garment, I shall be whole.

29 And forthwith the fountain of her blood was dried up, and she felt in her body that she was healed of the evil.

30 And immediately Jesus knowing in himself the virtue that had proceeded from him, turning to the multitude, said: Who hath touched my garments?

31 And his disciples said to him: Thou seest the multitude thronging thee, and sayest thou who hath touched me?

32 And he looked about to see her who had done this.

33 But the woman fearing and trembling, knowing what was done in her, came and fell down before him, and told him all the truth.

34 And he said to her: Daughter, thy faith hath made thee whole: go in peace, and be thou whole of thy disease.

35 While he was yet speaking, some come from the ruler of the synagogue’s house, saying: Thy daughter is dead: why dost thou trouble the master any further?

36 But Jesus having heard the word that was spoken, saith to the ruler of the synagogue: Fear not, only believe.

37 And he admitted not any man to follow him, but Peter, and James, and John the brother of James.

38 And they come to the house of the ruler of the synagogue; and he seeth a tumult, and people weeping and wailing much.

39 And going in, he saith to them: Why make you this ado, and weep? the damsel is not dead, but sleepeth.

40 And they laughed him to scorn. But he having put them all out, taketh the father and the mother of the damsel, and them that were with him, and entereth in where the damsel was lying.

41 And taking the damsel by the hand, he saith to her: Talitha cumi, which is, being interpreted: Damsel (I say to thee) arise.

42 And immediately the damsel rose up, and walked: and she was twelve years old: and they were astonished with a great astonishment.

43 And he charged them strictly that no man should know it: and commanded that something should be given her to eat.

Our Daily Bread for 1st February 2022 | Love Wherever We Go 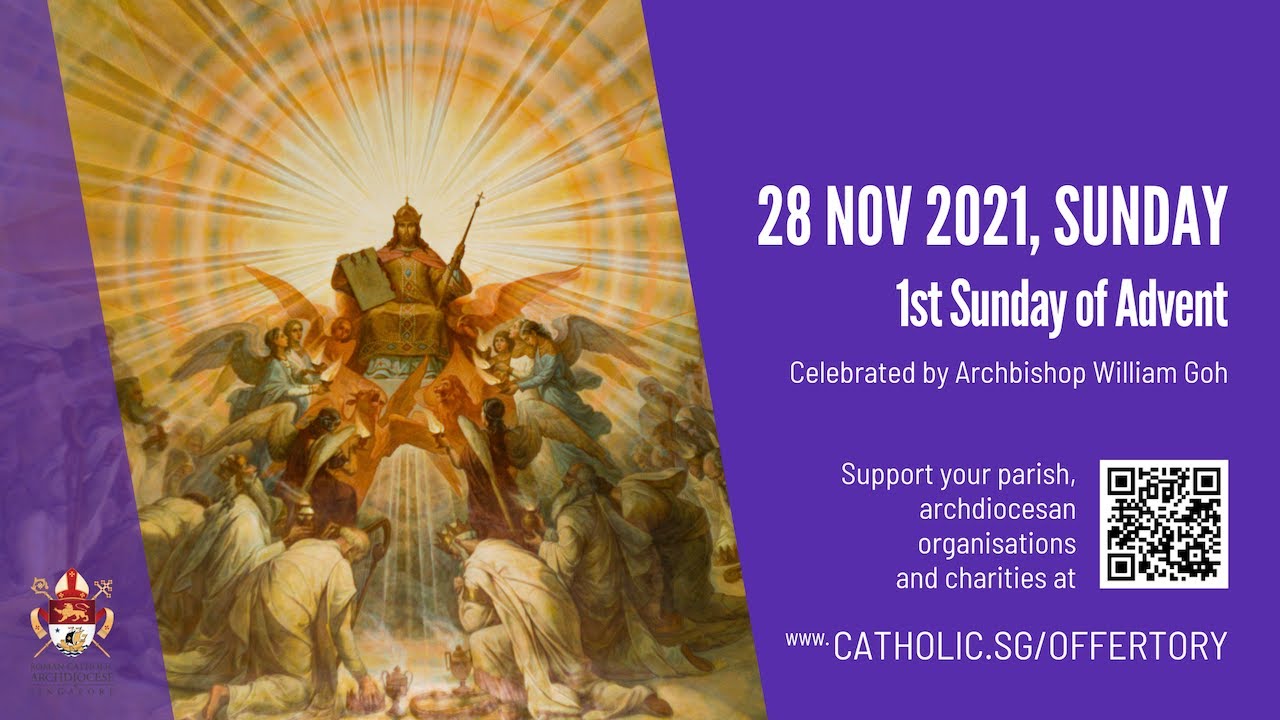