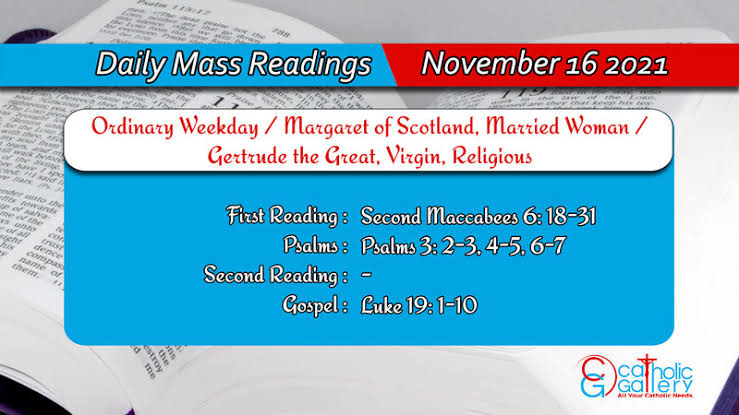 Welcome to Catholic Daily Mass Readings Tuesday, 16th November 2021. May the Almighty Father bless you through this Holy mass. God bless you! Kindly share with other people.

First Reading: Second Maccabees 6: 18-31
18 Eleazar one of the chief of the scribes, a man advanced in years, and of a comely countenance, was pressed to open his mouth to eat swine’s flesh.

19 But he, choosing rather a most glorious death than a hateful life, went forward voluntarily to the torment.

20 And considering in what manner he was come to it, patiently bearing, he determined not to do any unlawful things for the love of life.

21 But they that stood by, being moved with wicked pity, for the old friendship they had with the man, taking him aside, desired that flesh might be brought, which it was lawful for him to eat, that he might make as if he had eaten, as the king had commanded of the flesh of the sacrifice:

22 That by so doing he might be delivered from death: and for the sake of their old friendship with the man they did him this courtesy.

23 But he began to consider the dignity of his age, and his ancient years, and the inbred honour of his grey head, and his good life and conversation from a child: and he answered without delay, according to the ordinances of the holy law made by God, saying, that he would rather be sent into the other world.

24 For it doth not become our age, said he, to dissemble: whereby many young persons might think that Eleazar, at the age of fourscore and ten years, was gone over to the life of the heathens:

25 And so they, through my dissimulation, and for a little time of a corruptible life, should be deceived, and hereby I should bring a stain and a curse upon my old age.

26 For though, for the present time, I should be delivered from the punishments of men, yet should I not escape the hand of the Almighty neither alive nor dead.

27 Wherefore by departing manfully out of this life, I shall shew myself worthy of my old age:

28 And I shall leave an example of fortitude to young men, if with a ready mind and constancy I suffer an honourable death, for the most venerable and most holy laws. And having spoken thus, he was forthwith carried to execution.

29 And they that led him, and had been a little before more mild, were changed to wrath for the words he had spoken, which they thought were uttered out of arrogancy.

30 But when he was now ready to die with the stripes, he groaned, and said: O Lord, who hast the holy knowledge, thou knowest manifestly that whereas I might be delivered from death, I suffer grevious pains in body: but in soul am well content to suffer these things because I fear thee.

31 Thus did this man die, leaving not only to young men, but also to the whole nation, the memory of his death for an example of virtue and fortitude.

2 Why, O Lord, are they multiplied that afflict me? many are they who rise up against me.

3 Many say to my soul: There is no salvation for him in his God.

4 But thou, O Lord art my protector, my glory, and the lifter up of my head.

5 I have cried to the Lord with my voice: and he hath heard me from his holy hill.

6 I have slept and taken my rest: and I have risen up, because the Lord hath protected me.

7 I will not fear thousands of the people, surrounding me: arise, O Lord; save me, O my God.

10b God loved us, and sent his Son as expiation for our sins.

2 And behold, there was a man named Zacheus, who was the chief of the publicans, and he was rich.

3 And he sought to see Jesus who he was, and he could not for the crowd, because he was low of stature.

4 And running before, he climbed up into a sycamore tree, that he might see him; for he was to pass that way.

5 And when Jesus was come to the place, looking up, he saw him, and said to him: Zacheus, make haste and come down; for this day I must abide in thy house.

6 And he made haste and came down; and received him with joy.

7 And when all saw it, they murmured, saying, that he was gone to be a guest with a man that was a sinner.

8 But Zacheus standing, said to the Lord: Behold, Lord, the half of my goods I give to the poor; and if I have wronged any man of any thing, I restore him fourfold.

9 Jesus said to him: This day is salvation come to this house, because he also is a son of Abraham.

10 For the Son of man is come to seek and to save that which was lost.

ABOUT US
FOLLOW US
© 2022 All Copyright Reserved Our Daily Devotional24
We use cookies on our website to give you the most relevant experience by remembering your preferences and repeat visits. By clicking “Accept”, you consent to the use of ALL the cookies.
Do not sell my personal information.
Cookie SettingsAccept
Manage consent

This website uses cookies to improve your experience while you navigate through the website. Out of these, the cookies that are categorized as necessary are stored on your browser as they are essential for the working of basic functionalities of the website. We also use third-party cookies that help us analyze and understand how you use this website. These cookies will be stored in your browser only with your consent. You also have the option to opt-out of these cookies. But opting out of some of these cookies may affect your browsing experience.
Necessary Always Enabled
Necessary cookies are absolutely essential for the website to function properly. These cookies ensure basic functionalities and security features of the website, anonymously.
Functional
Functional cookies help to perform certain functionalities like sharing the content of the website on social media platforms, collect feedbacks, and other third-party features.
Performance
Performance cookies are used to understand and analyze the key performance indexes of the website which helps in delivering a better user experience for the visitors.
Analytics
Analytical cookies are used to understand how visitors interact with the website. These cookies help provide information on metrics the number of visitors, bounce rate, traffic source, etc.
Advertisement
Advertisement cookies are used to provide visitors with relevant ads and marketing campaigns. These cookies track visitors across websites and collect information to provide customized ads.
Others
Other uncategorized cookies are those that are being analyzed and have not been classified into a category as yet.
SAVE & ACCEPT
MORE STORIES