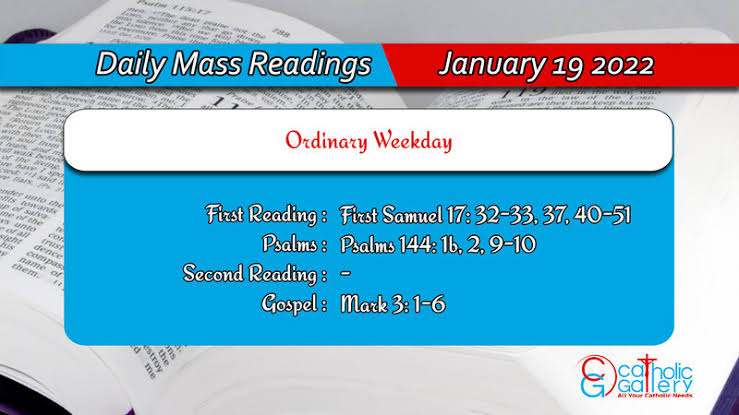 Welcome to Catholic Daily Mass Readings for Wednesday 19 January 2022 Ordinary Weekday. May the Lord bless you through this Mass reading. Kindly share with other people.

33 And Saul said to David: Thou art not able to withstand this Philistine, nor to fight against him: for thou art but a boy, but he is a warrior from his youth.

40 And he took his staff, which he had always in his hands: and chose him five smooth stones out of the brook, and put them into the shepherd’s scrip, which he had with him, and he took a sling in his hand, and went forth against the Philistine.

41 And the Philistine came on, and drew nigh against David, and his armourbearer before him.

42 And when the Philistine looked, and beheld David, he despised him. For he was a young man, ruddy, and of a comely countenance.

44 And he said to David: Come to me, and I will give thy flesh to the birds of the air, and to the beasts of the earth.

45 And David said to the Philistine: Thou comest to me with a sword, and with a spear, and with a shield: but I come to thee in the name of the Lord of hosts, the God of the armies of Israel, which thou hast defied.

46 This day, and the Lord will deliver thee into my hand, and I will slay thee, and take away thy head from thee: and I will give the carcasses of the army of the Philistines this day to the birds of the air, and to the beasts of the earth: that all the earth may know that there is a God in Israel.

47 And all this assembly shall know, that the Lord saveth not with sword and spear: for it is his battle, and he will deliver you into our hands.

48 And when the Philistine arose and was coming, and drew nigh to meet David, David made haste, and ran to the fight to meet the Philistine.

49 And he put his hand into his scrip, and took a stone, and cast it with the sling, and fetching it about struck the Philistine in the forehead: and the stone was fixed in his forehead, and he fell on his face upon the earth.

50 And David prevailed over the Philistine, with a sling and a stone, and he struck, and slew the Philistine. And as David had no sword in his hand,

51 He ran, and stood over the Philistine, and took his sword, and drew it out of the sheath, and slew him, and cut off his head. And the Philistines seeing that their champion was dead, fled away.

1 Blessed be the Lord my God, who teacheth my hands to fight, and my fingers to war.

2 My mercy, and my refuge: my support, and my deliverer: My protector, and I have hoped in him: who subdueth my people under me.

9 To thee, O God, I will sing a new canticle: on the psaltery and an instrument of ten strings I will sing praises to thee.

10 Who givest salvation to kings: who hast redeemed thy servant David from the malicious sword.

23 Jesus preached the Gospel of the Kingdom and cured every disease among the people.

Gospel: Mark 3: 1-6
1 And he entered again into the synagogue, and there was a man there who had a withered hand.

2 And they watched him whether he would heal on the sabbath days; that they might accuse him.

3 And he said to the man who had the withered hand: Stand up in the midst.

4 And he saith to them: Is it lawful to do good on the sabbath days, or to do evil? to save life, or to destroy? But they held their peace.

5 And looking round about on them with anger, being grieved for the blindness of their hearts, he saith to the man: Stretch forth thy hand. And he stretched it forth: and his hand was restored unto him.

6 And the Pharisees going out, immediately made a consultation with the Herodians against him, how they might destroy him.

Check Also
Close
By Blessed Odoko
All (1776)
Recent Posts
Categories
Facebook Twitter WhatsApp Telegram Viber
Back to top button
Close
We use cookies on our website to give you the most relevant experience by remembering your preferences and repeat visits. By clicking “Accept”, you consent to the use of ALL the cookies.
Do not sell my personal information.
Cookie SettingsAccept
Manage consent

This website uses cookies to improve your experience while you navigate through the website. Out of these, the cookies that are categorized as necessary are stored on your browser as they are essential for the working of basic functionalities of the website. We also use third-party cookies that help us analyze and understand how you use this website. These cookies will be stored in your browser only with your consent. You also have the option to opt-out of these cookies. But opting out of some of these cookies may affect your browsing experience.
Necessary Always Enabled
Necessary cookies are absolutely essential for the website to function properly. These cookies ensure basic functionalities and security features of the website, anonymously.
Functional
Functional cookies help to perform certain functionalities like sharing the content of the website on social media platforms, collect feedbacks, and other third-party features.
Performance
Performance cookies are used to understand and analyze the key performance indexes of the website which helps in delivering a better user experience for the visitors.
Analytics
Analytical cookies are used to understand how visitors interact with the website. These cookies help provide information on metrics the number of visitors, bounce rate, traffic source, etc.
Advertisement
Advertisement cookies are used to provide visitors with relevant ads and marketing campaigns. These cookies track visitors across websites and collect information to provide customized ads.
Others
Other uncategorized cookies are those that are being analyzed and have not been classified into a category as yet.
SAVE & ACCEPT
Close